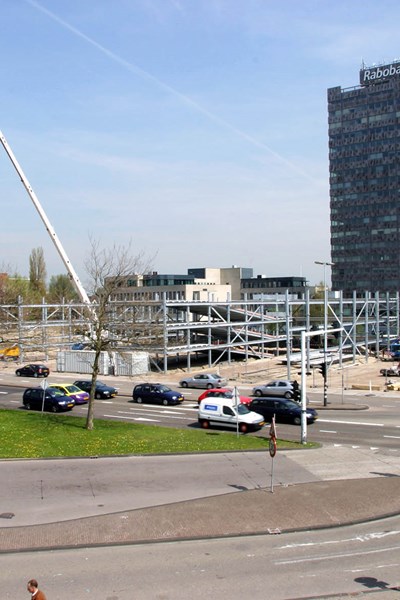 During the redevelopment of Zaandam city centre, there was a risk of there being a shortage of parking space. In less than three months, we erected a complete, fully-fledged ModuPark® car parking

The modular car park was ready for use in less than three months.

Our ModuPark® modular car park was exactly what was needed. The municipality was highly enthusiastic about the fully-fledged car park which can be built in no time and which is also highly sustainable, as it can be reused. We entered into a rental agreement that put us fully in charge of the day-to-day operations. Together, we decided to cover the facade with advertising, making the operation of the car park more profitable. This enabled us to bring down the already-low costs even further.

The car park was ready for use in less than three months. After the steel piles for the foundations had been put in place, the construction was erected in less than a month. We tightly coordinated the countless lorries that supplied the readymade material, thereby keeping inconvenience to road users to a minimum.

The parking problem was resolved straight away. On weekdays, the car park was filled with the vehicles of people working in the offices nearby; at the weekends, it was used by shoppers. When the redevelopment of the town centre had been completed, the temporary car park was no longer needed. We completely disassembled it, even removing the steel piles from the ground, and all the materials were immediately ready to be reused.